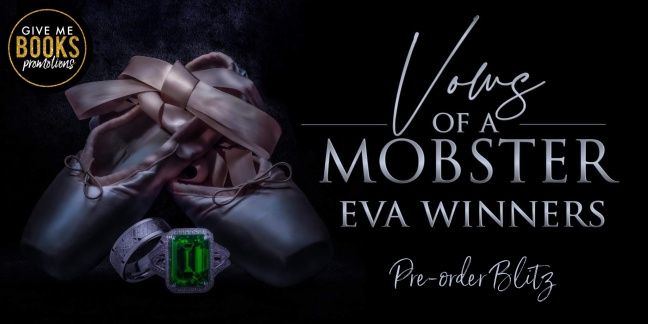 Title: Vows of a Mobster
Author: Eva Winners
Genre: Mafia Romance
Release Date: September 7, 2021
BLURB
The truth is never what it seems. Neither are the people, regardless of who they are.
✅ Mafia romance
✅ Age Gap
✅ Murder mystery
✅ Steamy sex
✅ Violence
I knew the past would come back to haunt me. It was only a matter of time before my world came crashing down.
The only thing I didn’t expect was Mateo. The head of the Italian mafia. We were never meant to cross paths; our worlds vastly different.
His green gaze captured me, his touch burning through my defenses. The words he whispered melted away all the years of loneliness. But the secret I kept could get me killed. If he spared me, his rivals wouldn’t. As my secrets unravel, it could cost me everything and everyone I loved.
ADD TO GOODREADS 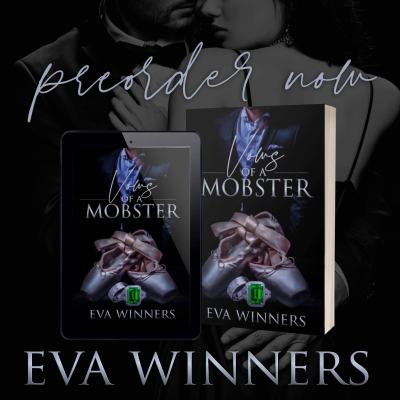 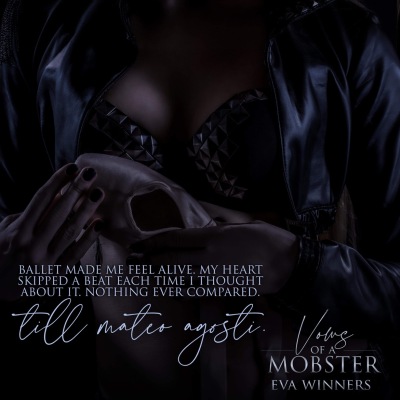 EXCERPT
“Brianna,” a deep man’s voice shattered through me, and all my cooling simmered into flames. I slowly turned in the direction of the voice, and there he was. In his full glory. “I thought we agreed first thing this morning in my office?”
“Well, it is the first thing this morning,” I told him boldly. “Anything before ten a.m. is first thing this morning.”
He chuckled. Fuck, he was hot. He was in a dark three piece suit, looking impeccable. I could see a gun holster peeking under his jacket. He seemed completely calm, unlike me. I wanted to push my fingers through his dark hair and wondered if it would be soft when I touched it. My cheeks were literally on fire.
“My office is this way,” he tilted his head and I walked towards him. He watched me, hunger in those green eyes, and I knew Marissa was right. He would fuck me first thing this morning.
I guess it wouldn’t have mattered if I blow-dried my hair. It would come out a mess anyhow.
He put his hand on the small of my back and guided the way through the wide, bright tiled hallway. His hand burned through my back, making my desire pool between my legs. God, what was this man doing to me? He was a bad guy. Totally hot but still a bad guy.
Who were we fooling? There was no way we would come out of this unscathed. I just hoped maybe it would only be me that came out scattered. If I could keep his focus on me, he won’t connect Marissa nor Daphne to any of the shit that went down.
We stopped and he extended his hand. He had a corner office, which wasn’t surprising. If he was the head of it all, he would have the best of everything.
I swallowed hard and entered his office. He closed the door behind him and locked it.
Yes, Marissa was definitely right. I lowered my purse onto the chair, then turned around to face him. He was right behind me, and I had to crane my neck to look at his face. I knew he was ruthless; I had heard many stories, but it didn’t diminish that he was also handsome. Very handsome and made me quiver with need on the inside.
“So where do you want me?” I asked. I meant for my voice to sound calm, detached, but instead, it came out breathless and needy.
His lips quirked as if he was entertained by the question.
“Where do you want to be, Brianna?” he replied in a challenge. I watched him, unwilling to jump into that trap. It wasn’t as if I had a choice here. “Did you enjoy last night?” he asked in a smooth, rich voice and my pussy, the damn traitor that she was, instantly ached with need.
“Did you?” I answered with the question instead. Damn it, Marissa would kill me if she knew this was enfolding in this manner.
“I did,” he answered, lowering his head and taking my chin between his fingers. His touch was surprisingly gentle. “If I recall correctly,” he murmured inches from my lips, “you asked for my cock.”
A gasp left me, and his mouth lowered on mine. This kiss was soft, demanding, and oh so sexy. My arms wrapped around his nape, my fingers intertwining through his hair. My body pressed against his. The moment I felt his hard shaft, I was a goner.
He pushed his tongue into my mouth and I opened willingly, welcoming him. Moans filled the room and I knew they were mine. All the years of deprivation caught up. I rubbed myself against him shamelessly, needing him, wanting more.
He lifted me, my legs instinctively wrapped around his waist. He sat me on the table, the wood cool under my butt. His mouth nipped my earlobe, his stubble pleasantly rubbing against my skin. He started pulling my panties down, and I eagerly helped by lifting myself off the table. I watched him through heavy eyelids, as he pushed them down my legs and tucked them into his suit pocket.
He spread my legs wide, leaving me exposed to him completely.
“Show me how you touched yourself last night,” he murmured. “I want to see it.”
I bit my lip. Shit, we barely got started and I could feel evidence of my arousal trickling down my inner thigh. I reached down between my legs and brushed my finger against my clit and a moan left me.
“What did you think about?” Mateo’s voice groaned into my ear. His hand covered mine, following my movements as I pleasured myself. “Tell me.”
“Your mouth-” my voice was a breathy whisper. I was so turned on; I knew I wouldn’t last long. “Your mouth on my pussy.”
My back arched as his finger entered me. “Ohhhh.” My eyes closed enjoying the sensation he was bringing. I put pressure on my clit and rubbed the nub.
“You like that?”
“Ohhhhh, I’m-” he removed my hand and my eyes shot open. “What-”
“Not yet, bellissima,” he murmured. His head lowered down between my thighs, his eyes never wavering from mine. And shit, there wasn’t a more erotic sight. He pressed his lips against my pussy and my whole body shuddered at the sensation.
“Mateo,” my voice was needy, begging. His tongue swirled around my clit, shooting pleasure up my spine. My hands grabbed his hair and pushed his face into my pussy. I couldn’t believe I lost all control. This wanton woman was foreign to me.

Eva Winners released her first novel Second Chance At Love in 2020 and has been writing feverishly ever since. She writes about everlasting romance for every century focusing on characters emotional development and always guarantees an HEA.
She loves yoga, wine and her kiddos. In her spare time, she seeks adventures either hiking through trails or exploring the beaches.
Writing books has always been her passion and she brings real life to the forefront in everything she writes about.
Deeply passionate characters and stories will draw you in and you’ll never want to leave.
Follow her on social media to stay up to date with all her new releases!
AUTHOR LINKS
FACEBOOK
FACEBOOK GROUP
INSTAGRAM
BOOKBUB
AMAZON
GOODREADS
TWITTER