IN THE DARK
Releasing May 11
My name is Lilly McGuire.
I accepted a long time ago that my older brother is no longer part of my life. It’s been over two years, and I still have no clue why he stopped talking to me.
Everything was great. Then he left for football camp the summer before I was going to join him at Westbridge High. When he came back, he pretended I didn’t exist, leaving the room every time I’d enter. Eventually, he stopped coming home altogether and basically moved in with his best friend, Wes. Our parents never said a word.
Now, just when I’m content again with my life, I choose the wrong topic for my journalism assignment. Or is it maybe the right one?
I get sucked into a ten-year-old case of missing girls, and with every passing day, I get pulled in deeper and deeper into a world that makes me question everything I believed to be the truth. When I finally decide that I’m simply losing my mind, something unexpected happens, and I have to make a choice that will determine not only my entire future, but also my safety.
My name is Rhys McGuire.
My life is based on secrets, and two years ago, I had to make a choice. I stayed away, but I’ve kept watching.
Now, fate has thrown me a bone, and the decision is mine again. Stay quiet or come clean? Continue the charade or tell her everything that’s been tearing me apart since I was seven years old?
The choice is mine, but do I really have one? If she finds out, I could lose her forever. The ones she has trusted most will be the ones that have betrayed her—maybe even beyond repair. I want to believe that she would forgive me, but could she move past all of the lies?
In the Dark is the first book in a series of secrets, love, friendship, betrayal, AND more secrets.
**AUTHOR’S NOTE:
Dear Reader, In the Dark is the first book in a trilogy within The Dark Series and ends with a CLIFFHANGER.
This series is intended for MATURE readers. Please be aware that as the series progresses, THE BOOKS could contain TRIGGERS some readers may find bothersome.
ADD TO GOODREADS

EXCERPT
Prologue
HIM
I walk into her room for the nightly check, expecting the usual crying and pleading to let her go home, but when I open the door and hear nothing, I know something is wrong. I rush to her small form on the bed, calling her name, but she is not responding. I shake her, but she’s completely limp in my arms. Checking her pulse, I sigh in relief. She’s alive. What have I done? I scoop her up and race outside to my car which, thankfully, is still in the driveway from my earlier errand. Making sure she is secure in the backseat, I break every speed limit to the nearest emergency room. I can’t lose her, too. Making sure my hat is low, hood covering my hair and most of my face, I race inside the double doors and nearly throw her at the first nurse I can find. “HELP HER!”
Back in the car, I lean my forehead against the steering wheel and try to catch my breath, chanting, “She will be fine. She will be fine. She will be fine. I’ll get her back.”

OUT OF THE DARK
Releasing May 25
My name is Lilly.
When I discovered our family’s secrets—my secrets—I thought it couldn’t get worse. I was so very wrong.
Not only did my family betray me, but through my desperate need for answers, I put myself back on his radar. He tracked me. He exposed me. But yet, I wasn’t afraid of him.
I wasn’t prepared for the answers he offered me. There was a connection I couldn’t deny, but what did that mean? For me, my future and, most of all, the boy I love.
I thought I knew the worst, but did I? The more I dug, the more questions emerged. How many secrets are there?
My name is not important. Yet.
I lost my family. I lost my freedom, for a while, then I found her. I had another chance, but I couldn’t keep her. They hid her from me, and I made peace with having temporary replacements.
However, one email during a painfully boring business dinner changed everything.
Now, I am looking at her, and I have to come clean. I don’t have a choice. But will my secrets scare her away? Most people would make a run for it and call the authorities on their way—but she’s not most. I’m not normal. I know it, and she will, too. Very soon.
The question is, will I lose her again, or will something develop that neither of us expected to find?
Follow Lilly’s journey in the second book of The Dark Series and find out the secret(s) that lead her to “him”.
**AUTHOR’S NOTE:
Dear Reader, Out of The Dark is the second book in a trilogy within The Dark Series and ends with a CLIFFHANGER.
This series is intended for MATURE readers. Please be aware that as the series progresses, THE BOOKS could contain TRIGGERS some readers may find bothersome.
ADD TO GOODREADS 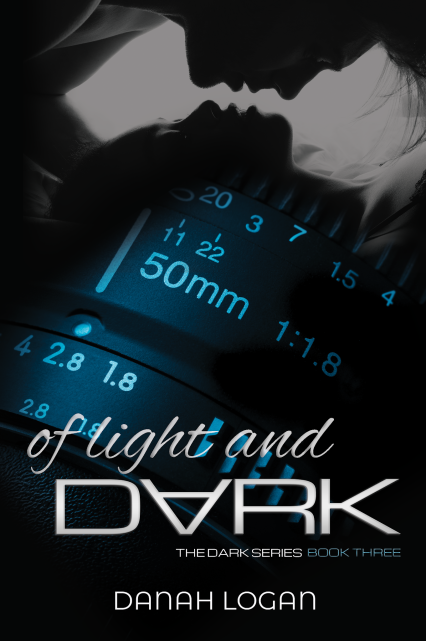 OF LIGHT AND DARK
Releasing June 8
My name is Lilly.
What is my last name, you ask?
I. Don’t. Know.
I lost track of who I am months ago. I thought I was a McGuire until my brother let me in on the secrets that drove a wedge between my family so many years ago.
Consumed with the need for answers, I made decisions others would’ve called reckless—and they’re probably right.
The feeling of betrayal sat too deep for me to see reason. I should’ve told my parents, informed the authorities, but trust is a fragile thing. Once it’s broken, is there really a chance of rebuilding it?
Then I met him.
He gave me answers, but he had questions of his own. The more time we spent together, the more we bonded…until the lines were blurred.
Home was no longer tied to a place but to two individuals.
Throughout our search for the truth, I almost lost the boy that means everything to me.
Hunted by the media, tormented by Rhys’s psychotic ex and her followers, I became a target, and my need to run put everyone at risk.
No one could’ve expected what actually happened over a decade ago. How one decision started a chain of events that led to me being the pawn in her game.
Find out what really happened ten years ago in this angst-filled, romantic-suspense story full Of Light and Dark.
**AUTHOR’S NOTE:
Dear Reader, Of Light and Dark is the third book and CONCLUSION of Lilly and Rhys’s trilogy within The Dark Series.
This series is intended for MATURE readers. Please be aware that THIS BOOK could contain TRIGGERS some readers may find bothersome.
ADD TO GOODREADS 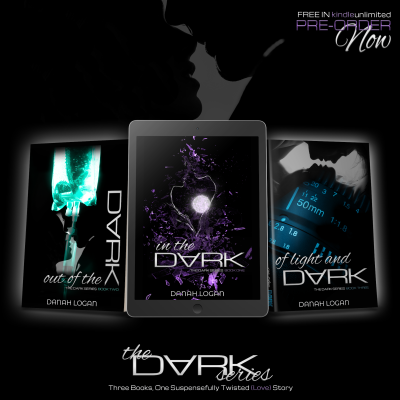 SERIES PLAYLIST
AUTHOR BIO
Danah Logan is a new aspiring Indie author. Born and raised in Germany, she moved to the U.S. and eventually traded downtown Chicago’s city life for the northern Rockies.
From a young age, she has always had “voices” in her head. She wrote short stories in high school; however, eventually stopped as life got busier.
Then, at the beginning of 2018, a friend told her she should pick her writing back up. Until that point, her focus was on raising her two-year-old twins, and she had never even thought about writing again. One evening, she dug through old back-up CDs (yes, people still have those) and found the original version of one of her short stories. About forty thousand words in, she realized there is no way to tell the story in just one book, and that’s when her first book series was born.
With many more plots in her head, this writing gig has become Danah’s passion, and she spends every free minute in front of her laptop, letting the voices out.
AUTHOR LINKS
FACEBOOK
FACEBOOK GROUP
INSTAGRAM
PINTEREST
GOODREADS
AMAZON
SPOTIFY
WEBSITE
TIKTOK

One thought on “COVER REVEAL – The Dark Series by Danah Logan”