Title: Experimental Marine Biology
Series: Chemistry Lessons #5
Author: Susannah Nix
Genre: Romantic Comedy
Release Date: June 15, 2020
Blurb
“Just friends” is all Brooke and Dylan have ever been.
(Except for that one night in high school, but they don’t talk about
that.) Growing up, he was her protector. Her confidante. The one guy
she could always trust.

Now she’s a marine biologist working toward her PhD in California, and he’s an
underwear model in New York. Dylan’s only in town for a few days, crashing
on Brooke’s couch and repaying the favor by acting as her date to a
friend’s wedding.

It was totally an accident she saw him naked.

After that, “just friends” goes out the window in favor of friends with benefits.

It’s all going great…until it isn’t.

Dylan’s got a ticket back to New York at the end of the week, and Brooke may
have accidentally broken his heart. Can they navigate these uncharted
relationship waters? Or has she tanked her oldest friendship?

In her living room.

Right in front of her.

Not in a dream, but in real life.

His ass cheeks flexed as he stooped over his suitcase, and
hisheard herself gasp, and Dylan spun around, giving her the full-frontal
experience.

There wasn’t a lot of light in the room, but there was enough.

For a second they both stood there frozen in shock. Brooke
withglory. Completely naked and hot as hell.

“Shit!” he yelped, belatedly trying to cover himself with the pair of
underwear in his hand. “I thought you were asleep!”

Brooke covered her eyes and turned her back on him. “I thought you were in
the shower!”

“I was letting the room fill up with steam to sweat off a little more
water weight, but I forgot to grab clean underwear.”

Brooke swallowed, trying to ignore the image of Dylan’s penis that was now
permanently seared into her brain. “Okay. Cool. Well…uh…looks
like you’ve got them now.”

“Yeah. So. I’m gonna go back into the bathroom.”

Keeping her eyes directed at the floor and her hand up to shield Dylan’s
still incredibly naked body from her view, Brooke moved aside so
he could get past her to the bathroom. “Cool. Yep. I’m just gonna go…”
She waved in the direction of the kitchen with the hand that wasn’t
covering her eyes. “Make some coffee or whatever.”

“Cool.” Why was she saying cool so much? Nothing about this was cool! It
was the opposite of cool. It was…

Except no. It was Dylan, and she did not want to think about him
like that. Okay, she wanted to, but she shouldn’t. 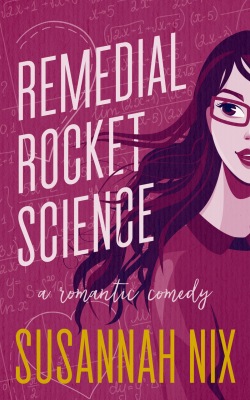 Susannah Nix is a RITA® Award-winning author of contemporary
romance who lives in Texas with her husband, two ornery cats, and a
flatulent pit bull. When she’s not writing, she enjoys reading, cooking,
knitting, watching stupid amounts of television, and getting distracted by
Tumblr. She is also a powerlifter who can deadlift as much as Captain America
weighs.
Author Links
FACEBOOK
TWITTER
INSTAGRAM
GOODREADS
BOOKBUB
WEBSITE